Some Morals I learnt from the movie: Law Abiding Citizen

I had the chance to watch the movie, Law Abiding Citizen, after a good friend W, mentioned about it during one of our late night buddies (F,W,A,A) chit chat sessions. 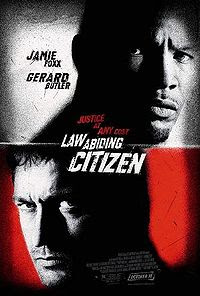 It was a very exciting movie in terms of plot. Gerard Butler starred in this movie and he was also one of the producers. Jamie Foxx was casted as the second lead in this vengeance thriller.

The plot is about a man exacting his vengeance on his family's murderers and the justice system as one of the murderers did not get the capital punishment due to the flaw of the preceding legal system.

Without revealing much of the plot, I just wanted to share what I had learnt after watching the movie.

1) Never screw with engineers
2) Scottish accent is easy to hide [Gerard Butler]
3) A man will always put his family before him.
4) A T-bone stick can be a very imposing meal to have in presence of foes
5) Mayors do nothing but use their mouths
6) Homeland Security in USA is a useless visual deterrent
7) 10 years is too short to plan for revenge
8) At the end of the day, you will always definitely get screwed by a lawyer

But in the meantime, here's a trailer of the movie : Law Abiding Citizen

FYI, I read the plot before watching the movie but still enjoyed the movie very much after knowing the full plot!
Posted by FB at 6:06 PM