Not sure what this picture is?

This is a static picture...
Bet you are seeing stars..

We live in a world whereby nothing comes free..

Yesterday on TV, I learned a new word

It means to give something in order to have something.
Mutual exchange of favours.

If something comes free, then we will incur this thing known as emotional debt.
Emotional debts in my own words means you owe someone a favour that is yet to defined and you will not know when or how to balance the equilibrium between 2 persons.

And if you have emotional debts, more than likely, you'd be compelled to return the debt as fast as possible and that results in committing to more than what you'd asked for (for free) in the first place.

To those whom have always been on the receiving end, be aware of the "debt" that you are incurring. One day, you'd be called upon to return the debt...
Posted by FB at 4:31 PM

If you can screw the head of state, control the(his) nation's wealth and your name rhymes with "hedging", it's little wonder to be listed as the top 5 women in the world according to Forbes.

After losing that much $$ for Singapore, I personally don't think the above piece of news is worth celebrating at all.
Posted by FB at 11:09 AM

A Malaysian model will be given 6 strokes of the cane.

Because she consumed alcohol in a club in her own country.
Last discussed in this blog about Malaysia being a secular or islamic state.
If it's a secular state, how come she is punished under the Islamic law?

Read here on Malaysia's confusion about being Islamic or Secular state

The model resides in Singapore with her Singaporean husband and 2 kids and has been living in Singapore for more than 15 years.

The constitution states that Malaysia is a secular state, but the few recent Prime Ministers kept on reinstating the fact that Malaysia is an Islamic state. But the first Prime Minister of Malaysia, Tungku Abdul Rahman, did contradict and said in the 80s that ," All talk on Islamic States is just an empty dream. No man in his right sense would accept a nation which bases its political administration on religion, and in a country like Malaysia with its multiracial and multireligious people, there is no room for an Islamic State "

If it's a secular state, then it's laws and penalties should not be based on citizen's religion or race and should be standardized regardless of race, language or religion. If it's an Islamic state, then change the constitution to clarify the confusion so as to put an end to the confusion and then let the non-Muslims decide if they'd want to stay or leave.
Posted by FB at 3:15 PM

A taxi driver.
A Stanford PhD doctorate.
A Principal Investor of a major firm in Singapore.
An ardent blogger.

These above characters are not 3 different persons. It is all the same person.
A laid off principal investor from a major firm in Singapore, whom has a Stanford PhD doctorate to his name, now drives a taxi and blogs about it proudly in his daily log of interesting trips.

Respect for the doctor whom is man enough to take on a job that is totally not related to his academic and professional experience. From his blog posts, I can sense contentment within and it seems that with each successful trip, he feels fulfilled regardly if the passenger thank him or not.

A good read to see how one derives joy from work, regardless blue, white or no collar.

I only hope he is not driving and blogging at the same time!
Posted by FB at 9:32 AM

Batman wannabe builds his own Batmobile! 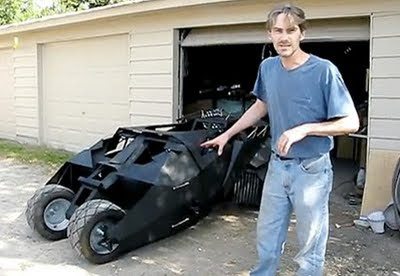 A go-kart enthusiast and Batman wannabe (both the same person) built this amazing lookalike Batmobile replica of the one shown in the recent 2 Batman movies, namely Batman Begins and The Dark Knight.

It looks almost like the real thing, perhaps not to the actual scale of the original used in the movie.

After which, he decided to put it on sale in Ebay. It closed with a total of 2 bids of at a selling price of US$30.88. Not too sure if it was actually sold for that price though..

It's gonna look cool though, to zip around your local park in this machine! 64 years since the Hiroshima nuclear bomb was dropped..

It was the first 'demon'stration of USA as a superpower and it exercised its authority as the world's big brother.

It ended the war... at a certain cost.

If USA proved to the world that using bombs can help them to achieve their result, perhaps this idea kinda got propagated to the terrorists we know today.

So when someone detonates a bomb and ask for a certain demand, we know the historical fact of whodunit first..

Nectar between the thighs!

Bees are attracted to honey...

But no one knows why the bees swarm around the bicycle seat post of this chap.

Perhaps, he has got nectar at his groin.. 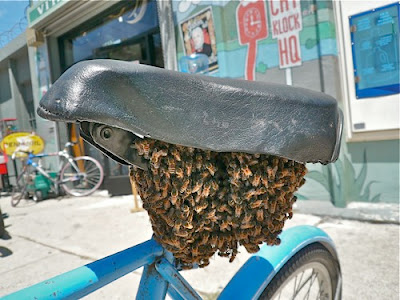 Happy Birthday Singapore! We owe you the success!

Last week, I received a notification from the PUB telling me that they'd recently came to check on my electricity meter and saw a sharp increase of electrical usage. The bill turned out to be S$300. My usual bill was near to $200.

My newborn arrived in mid June 2009. And my new maid came 2 months prior to that. When I didn't have the maid, we used to eat out a lot and didn't cook that much. The main electrical consumption will most likely be the aircon that we use every night.

The 3 of us, my wife, my 5 year old daughter and me would sleep in the same room, enjoying the cool air from the same aircon. That averages to be about $200 plus.

With our new baby, I have to sleep in another room so as to make way for the baby cot and turn on the aircon there. That luxury of turning on an additional aircon happens to be S$100 per month. To help to cope with the 2nd kid, we hired a maid, whom we pay her a salary of S$320 per month. Not to mention a levy of S$170 to the government for hiring a foreign maid.

Though we have a maid to help out with the housework, we don't leave our children fully under her care. Sadly both our parents are unable to take care of our kids for us because they have their own careers and lives, so we send them to a nanny during the day. Our nanny costs us about another S$550 per month. Because we have to send the kids over the their nanny, constantly taking taxi isn't a good idea, so we bought a car. For the car, the expenses of owning and operating it costs us close to S$1200 per month.

For our own sake, we forked out a little on entertainment to take our mind off the bills, these entertainment comes in the form of cable tv and broadband, that adds another S$110 to the total monthly bill.

Lets add up, shall we?

For monthly recurring bills, we are paying up to S$3200 as a upkeep to our way of life. And this doesn't include miscellanous such as monthly allowances to parents, money spent on food, etc.

Mr Lee, if you can help address the average Singaporean Family Dilemma such as the example above, I think your incumbent party and government are worthy to rule Singapore. Giving residents the chance to own their own housing just doesn't sound that attractive anymore given the prices nowadays.

And if the average Singapore Family Dilemma cannot be solved, I can assure birthrate of the population will continue to dwindle.

Happy Birthday Singapore.
I sometimes wonder if it'd be easier if we were elsewhere than in Singapore.
Posted by FB at 1:18 AM