Ever seen a drug peddlar discourage drug abusers from using and even offer them alternatives so that they'd not abuse it so much?

It is a "friendly" challenge to bring young scientists and students around the world together to share their knowledge and compete in designing an Eco-Friendly car that can achieve the most miles per gallon.

From an "Everything's a Conspiracy!" perspective, I'd say this is a way for big oil producing companies to find out who or what may produce a potential technology that might ruin their corporate future and probably destroy it before even it takes shape.

Surely, the promise of fame and fortune is enticing enough for Singapore to send a team from its creme ala creme from "NUS". The team is aptly named "Kent Ridge Urban Concept Eco-Car" or KRUCE for short.

Perhaps we fail to remember, how much of the GDP of this small little dot in South East Asia depends on oil related technology. eg Oil refineries, construction of oil rigs, drilling equipment etc.

And did you know the number of by-products that are produced from the refining of crude oil? Most of our plastics that we use on a daily basis are from these by-products. Even the pharmaceutical industries are dependent on by-products of oil refining. Not to mention that some of these pharmaceutical giants have set up base and plants in Singapore due to the oil refining facilities here.

So though this little dot on the map doesn't have any oil underneath it, it owns the world's largest rig manufacturer, Keppel Corp. It is also the country in South East Asia that refines the most barrels of oil per day.

For a business so lucrative and even more addictive than drugs... are we really looking into how to discourage the use of petrol , now that our nation's economy seriously depends on it? Or are we simply insinuating that weaning ourselves off petrol will never happen?

I am going for a run at ECP to burn off calories that is accumulated because I drive more often now and hardly take walks or buses...
Posted by FB at 11:21 AM

How I got my wife and 3 other women pregnant!

I recommended them to the procedure known as Ovarian Drilling.

What were you thinking of?

Anyway, Ovarian Drilling is a process done during laparoscopy.
So what is Laparoscopy?

A very fine surgical needle is directed to the ovaries via video assistance and make punctures on the ovaries about 4 - 10 times.

Some videos of the ovarian drilling process here.
[Warning : not for the faint hearted or those with weak stomach ]

More on why this is necessary....

If you know any couples, whom have been trying hard for a baby without any success, and they had tried clomid/clomifene for some time, do refer this blog post to them via this short link.

What's Up with Kids These Days?

Kids are always adventurous and trying out everything that adults advise they should never do.

I gotta admit, one of the poorest choice of vice I'd picked up was smoking.
I remembered nicking a stick from mum's cigarette box whenever she was out.
That was when I was 13 going on 14.

Though I didn't really become a habitual smoker until I was 18 when I was mugging for my A Levels, these nasty tobacco devils did get stuck with me throughout my 2.5 years of National Service in the Army.
I saw the prices of cigarettes rise from S$1.80 to S$3.20 for a pack of 10s and it became to only being sold in large packs of 20s. Despites the new unsightly images compulsorily printed on cigarette boxes, warnings of tobacco/nicotine affecting lung/heart's health, it didn't seem to deter young adults like myself then.

To date, a pack of 20s will set you back about S$11.60 in Singapore.
By raising the costs of cigarettes, the government aims to deter young folks from ever picking up the habit, but other than increasing the revenue of taxes collected from cigarette manufacturers, there doesn't seem to be a reduction of smokers of the young adults age group.

What gives me real apprehension is the recent news I'd read about in my RSS reader.
Kids in US of A are not smoking cigarettes or cannabis but the latest trend is to smoke "Chocolate Smarties" or the equivalent of our "M&Ms" here.

NEW TREND: SMOKING CANDY
Is rising cigarettes cost the issue or is it merely young kids being adventurous?
Whichever the reason, it makes no sense. But the young is usually branded with being "dumb".

I used to live near the Katong area in Singapore in the period of 91-93. 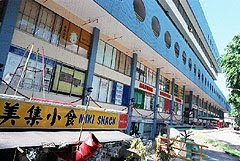 For me, it was the PC shops that attracted me then. The walk to KSC was about 3-4km, not exactly near, but I'd always find excuses to visit KSC. Though by the 90's, it was already pretty rundown and oldish compared to the newer malls, the mall had this nostalgic feel as if it was stuck in the 80s. Back then, there were numerous PC shops there. Most of them sells pirated softwares and games, which attracted quite a lot of young children and teenagers. But they also attracted the law. These shops open and close so often due to police raids, it's hard to keep track how many PC shops except for 2 shops which was there the longest time. Basic Computer and HardWareHouse. The first shop is no longer around but I believe HWH still exists in Sim Lim Square. Not sure if they are the same though.

The second storey used to be made up of a myriad of copy printing shops, which takes up almost half the floor near the escalator, and smaller shops which consists of the KTV equipment shop, shoe shop, some contractors near the end of the floor and a few maid agencies.

So much fond memories of the place. I believe, I can remember most of the shops and its staff ,whom used to work there, with my eyes closed.

Last weekend, I revisited the place again after a long absence. Upon entering the KSC, I could instantly remember the smell, that sadly was the only thing familiar. So much of KSC had changed. I was happy to see some shops still around. The shoe shop, the copy printing shops and the KTV equipment store were still there. KSC now is made up mostly of maid agencies and contractors. It had seemed to have lost its Peranakan charm.

Katong, from as far back as I can remember, was the place to be. Even before Bukit Timah. District 15 aka Katong was the place to be living in if you want to show off how well-to-do you are. Many well-to-do Peranakan families preferred to live there and their closely knitted communities also meant that many businesses related to Peranakan culture sprout in the Katong area and flourished those days. Especially in the business of food, you will still be able to find quite a selection of Peranakan food in the area near to KSC.

As I was leaving KSC that day, I saw something interesting. It was typical Chinese Geomancy shop. The shop sign has both the chinese name and a completely unrelated english name.
The chinese name on the signboards means something like "Study of Mysterious Science". It can be loosely translated into "FengShui". As for the english title which is below the chinese text...

A Picture Says A Thousand Words. 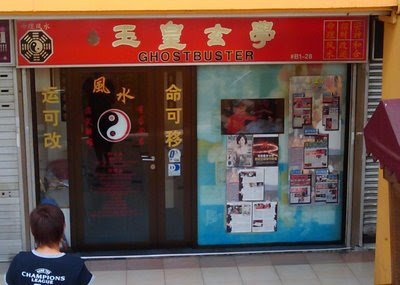 
Some more nostalgia of Katong and KSC here.

If you come across anymore nostalgic stories or images of Katong, kindly let me know.
I miss that period of Katong so so much.