A Lesson in Game

A colleague shared with me something new in which I had not known throughout my academic and professional career. It's a concept of which can applied to almost any fields and it helps a great deal in making decisions or predicting outcomes.

This concept is actually several ideas grouped together as a theory (which also is a branch of "applied mathematics") that can be applied of non-numerical calculations to predict reactive behaviors to given conditions.

A simple example will be 2 persons playing a simple 2 step game whereby each player's decision at step 1 and step 2 will result in either both having equal points at the end of the game or having a winner and loser separated by a large margin.

So in the simple matrix game above, one player chooses the left or right, while the other player chooses up or down. With 4 different possible outcomes, each players decision will decide if they both gain positive points with a marginal difference between them or both lose or both lose with negative points. If each makes their own decision without knowing the other's decision, it'd be a completely random outcome. However, if the second player's decision is based on the first player's decision, then the second player have the opportunity to either "defect" to sabotage the first player or "cooperate" but gaining lesser points than the first player.

The first player can also have a choice in determining the results, because if he chooses "Down", and if the second player "defects" to choose a destructive outcome, then at least his initial decision of choosing "down" rather than "up" will not result in reduction in points, should the second player decide to play "defect".

The "Game Theory" aims to find an equilibrium in such interaction of decisions and results between subjects of human and non-human form. In short, if a chess player is trying his best and apply a constant regular pattern in his thinking/deciding behavior and has fixated on a set of moves which he or she feels is the best way to play chess, then his opponent will base his or her set of theories and fixate on their own constant pattern in playing again the opponent's moves. And since both challengers have fixated to a regular pattern of playing, it can be said that there is an Equilibrium since both are playing a strategy that is to their best knowledge and both are unlikely to change their strategy against each other. One of the more famous Equilibrium concepts, which can be calculated numerically to logically derive decisions, created and named after "John Forbes Nash" is the "Nash Equilibrium" solution concept. A movie depicting the life story of "John Nash" has been made with its film title to be "A Beautiful Mind" starring Russell Crowe.

However, there are quirks in the decision making process between 2 or more parties which will result in a solution which is considered abnormal or deviate from the logical explanation. From the above basic matrix game, repeated playing the game and alternating between the first and second player positions, an equilibrium will be achieved when both players repeatedly cooperate and achieve a "Up,Left" or "Down,Right" result whereby as they alternate between their player's position, they'd get equal points.** [ see bottom final paragraph ]

But in a unique case of the "Prisoner's Dilemma" game, a very different result, which deviate from the expected solution equilibrium, is produced. In the Prisoner's Dilemma game, consider 2 persons accused of murder and both present at scene of crime at time of murder. Both are detained by the police and in separate rooms undergoing interrogation. Both are aware of the possible outcomes.

Outcome 1 : Both remains silent, both accused are detained for 24hrs and can go free after that as the police have no case.

Outcome 2 : One of them betrays the other and proclaims his own innocence while the other remain silent, Betrayer will get 2 years and Silent will get life imprisonment without pardon.

Outcome 3: Both betrays each other, each get 5 years imprisonment.

Logically, it makes sense for both not to betray each other and they go scot-free after 24 hours. However, human nature of self-interest or fear will result in making a decision that is based on the mistrust of another human being. So the mind of each accused under such a situation will question what will be his best decision, should the other isolated accused chooses to betray? So for his own sake, he should also betray.

Though the result doesn't really fall into the Game Theory solution, (in which, one is playing his best based on knowing that his opponent will also play his best) doesn't apply in the scenario, but a Nash equilibrium can be said to be achieved [ ie each player is playing to maximize his own payoffs without consideration of the other player's payoff in the game ]. Such games are also known as "Zero Sum" games whereby one player's winnings equates to another player's losses and the winnings and losses sum up to zero and hence the title "Zero Sum". The card game "Poker" is an example of the Zero Sum game whereby one wins exactly the amount the other loses.

While looking up on the subject on Game Theory, it is also interesting that a more recent application of the theory was seen in TV, specifically the Monty Hall problem as demonstrated in the TV game show "Let's Make a Deal"

The show features a contestant and 3 closed doors. Behind a specific door, there's a car waiting to be won, the other doors will have each a goat behind it. The contestant is then free to make a choice on a closed door which he or she believes that there is a car behind it. Once the decision is made, the TV show host, Mr Monty Hall, will then assist the contestant by opening a door which doesn't contain the car. This eliminates the chances of choosing a wrong door and the contestant will then be allowed to change his choices between the 2 remaining doors.

At the beginning, the law of probability will show that the initial choice has a 1/3 or 33.33% chance of guessing the correct door. However, after eliminated one empty door, the contestant is given a choice to make another decision again, ie to stay or to change. Though many will say since that the final choice is a decision between 2 doors, the probability of getting it right regardless if he switch his choices or not is irrelevant since it is still a 50/50% game of chance.

However, with all the possible outcomes presented (see diagram below), it is interesting to realize that, switching choices at the 2nd stage give the contestant a 2/3 or 66.67% chance more of winning the car than sticking on to the original choice which will only give him 1/3 or 33.33% of the chances to win. Hard to work out mentally but if you add up the switching probability of winning the car, you will see that its 66.67% chance of winning if the contestant switches door when given the opportunity to change. 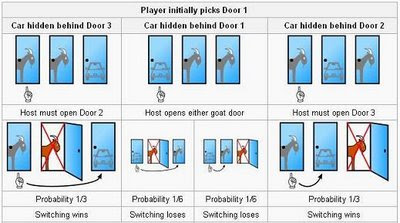 The Game Theory has been applied to many fields of science to predict the behavior of plants and animals. It has also been used in predicting human behaviors reacting to politics, economy, etc. Marketing campaigns between different brands of similar products can also be analyzed using the theory. An interesting explanation of competing cigarette brands and their advertising costs and how it relates to the Game Theory can be read here.

The Game Theory can be applied onto any situations whereby a decision can cause a reaction and to help make the type of decisions to cause the best expected reaction or least negative impact with best positive results.

**
It makes sense to alternate winning more and winning less as the 2 players switch between player 1 and player 2 positions between them and hence reach an equilibrium when both understand that if they keep doing this, they will have equal points throughout. But what if the last game is to be played on an odd round?
ie last game to be played is game 49. And at game 48, each player has an equal score of 84 points each. The question now is, if you are either player, would you defect or would you cooperate?